Pink, fending for herself 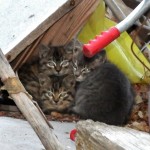 Kittens in the car lot 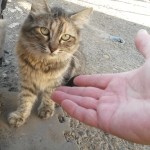 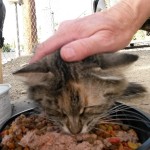 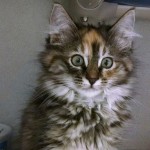 One of the kittens, ready to find a home!

Ready to find a home 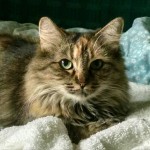 Learning to enjoy the comfort of blankets!

Pink used to live on her own, hiding under the vehicles in an old car lot.

There, she cared for herself and her litter of seven kittens. Each day, she ventured out cautiously to find food, and then hurried back to care for her babies. When a Good Samaritan set up a feeding station, she was too frightened to make friends or be touched.

With patience, Pink became more trusting. The Good Samaritan stayed patient, coaxing Pink with kibble and reassurance, until at last, she let herself be picked up and put into a crate.

Six of her kittens were easy to find, but the seventh, a black kitty, got scared and hid. When this little one realized that her mom and brothers and sisters were gone, she came out of hiding and began to cry. The rescuer found her and reunited the relieved kitten with her family.

Pink and her seven babies came to Seattle Area Feline Rescue, where they got the TLC they needed to grow strong and healthy. At the rescue, the kittens turned into curious, playful fluffballs, and each of them found loving homes very quickly.

Pink was  a different story, still shy from her time on the streets. She found the rescue environment overwhelming, so she went into a foster home for more care. At first, she thought her foster home was scary, too, and spent her time hiding behind the shower curtain.

With more time and patience, Pink began to let go of her survival mode. She chirped to her foster mom, became an expert “biscuit maker,” and sought out pets. She even cautiously explored what being a lap kitty might be like, starting by putting just her paws in her foster mom’s lap.

Toys were a revelation: at first they made Pink nervous – until she discovered ping-pong balls. Then toys were her new favorite thing in the world! 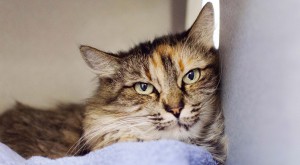 Pink at the Rescue (photo by K.A.Moore Photography)

Once Pink had decided that humans could be trusted, and even loved, she was ready to come back to the rescue and find a forever home. She won the heart of an adopter who took her home to join the family. Now she has a home of her very own – instead of fear, her life is filled with love and comfort!

Thanks to all the Good Samaritans, fosters, volunteers, donors, and adopters who make it possible for kitties like Pink to find a happy endings to their story.

You make such a difference for kitties in need!