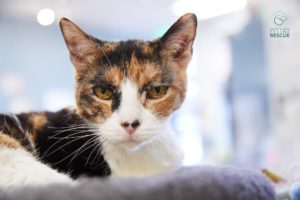 Where can a homeless, itchy, senior kitty have a second chance at finding a home in Seattle? At Seattle Area Feline Rescue, of course! Wendy fits that bill exactly: at 10 years old she was brought to another local shelter as a stray after fending for herself along Lake City Way. She was experiencing discomfort due to extremely itchy skin and hair loss. Soon, she came to SAFe Rescue for a second chance.

Seattle Area Feline Rescue is a “SAFe” haven for kitties who might need extra love or care. When Wendy arrived, the volunteers and staff here were immediately smitten. Her eyes reminded us of a beautiful galaxy: she looks like she has stardust in her gaze! She was consistently sweet and loving, soliciting everyone she met for pets and affection. Although she wasn’t enthusiastic about playing, napping on catnip pillows became her favorite pastime.

At SAFe, Wendy went from stray kitty to TV star when KING  5 Television featured her as their adoptable cat of the month. We are certain that viewers were as mesmerized by her eyes as we were! Soon afterwards, her purr-fect family came into the rescue looking for a kitty. She now has 2 human kiddos to play and snuggle with, and even better… she has a senior kitty brother to keep her company!

SAFe Rescue is dedicated to giving kitties like Wendy—whether they are senior, special needs, or just in need of some TLC—all the love, food, and medical care they need until they can be placed in furr-ever homes with their purr-fect humans.