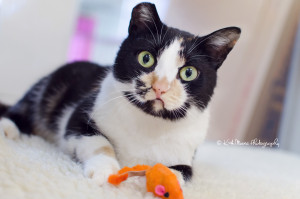 Adorable, friendly Emmy has an ear tip. (She found a home!)

Answers to FAQ About Ear-Tipped Cats

You may have noticed that some of our adoptable kitties—or even some of the cats you see in your neighborhood—are missing the tip of one ear.  Here are answers to some common questions you might have about ear tipping.

What is ear tipping?

Ear tipping is a humane way to show that a cat has been altered (spayed or neutered). The tip of one ear (~.25 inches) is surgically removed.

This procedure is only done under anesthesia so that the cat doesn’t feel pain, and the ear tip heals quickly. The ASPCA endorses ear-tipping as a safe, humane procedure, and spay and neuter clinics routinely ear tip community (or feral) cats. 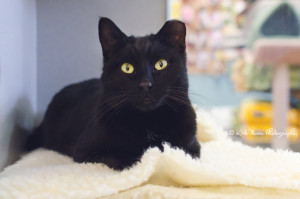 Raisin has an ear-tip, too.

Why is it important to be able to see if a cat has been altered?

Caretakers of free-roaming community cats work to prevent homelessness and overpopulation by practicing TNR (Trap/Neuter/Release). They need to be able to tell if an animal has already been altered, so that they don’t trap cats and take them for unnecessary surgeries. (You can learn more about TNR and community cats from the ASPCA.)

But isn’t there an alternative?

Ear tipping is the only safe way to see from a distance that a cat has been altered. Microchipping is not visual: the cat still needs to be trapped in order to read the chip. (And being trapped is a very stressful experience!) Tags and collars can cause infection or fall off.

If I see a kitty with an ear tip, does that mean it’s feral? 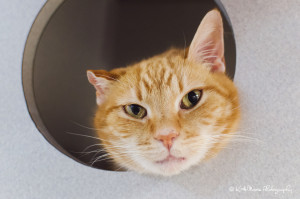 Finley doesn’t have an ear-tip – a medical condition changed the shape of one of his ears.

Not necessarily. Some clinics provide free spay and neuter for pets and include an ear tip in case the kitty ends up as a community cat. Sometimes stray kitties seem feral because they’re scared, but
then after surgery the rescuers find out that they like to be around people. There are lots of friendly, adoptable kitties who have an ear tip!

So every kitty with an ear tip has been altered?

Yes, but some kitties have ear conditions that may resemble an ear tip at first glance. For example, adorable rescue kitty Finley had ear mites that eventually caused an injury and changed the shape of his ear. (We still think he looks very handsome!)

Does it matter which ear?

In the Puget Sound area, some clinics always tip the right ear for females, and the left ear for males. So, if you see a cat with the right ear tipped, it’s most likely a girl kitty!

Where can I learn more?

The Community Cat Coalition has a great deal of useful information on ear tipping and community cats!

Share this:
Posted in Feline Care and tagged Care Tips.