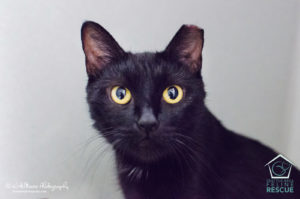 Mary used to fend for herself outdoors: it was a hard, dangerous life for this petite young cat! A Good Samaritan trapped her and took her to be spayed. At the clinic, they discovered that she had recently given birth. This was worrisome news – without their mom, her kittens wouldn’t survive long. Fortunately, after some searching, the kittens were found and reunited with their relieved momma!

Mary came to Seattle Area Feline Rescue with all her kittens. She was a devoted, patient mother, and spent time in foster care nurturing them until they grew strong and healthy. Her foster family, fans of the TV show Supernatural, added “Winchester” to her name in honor of one of the characters.

After some TLC in foster care, Mary Winchester and her “Supernatural Litter” (Castiel, Sam, Lilith, and Dean) were ready for adoption. . . just in time to go home for the Pawlidayz! On Black Friday, they all found loving homes in just one day as part of Zappos and Best Friends Animal Society’s “Home for the Pawlidayz” promotion! 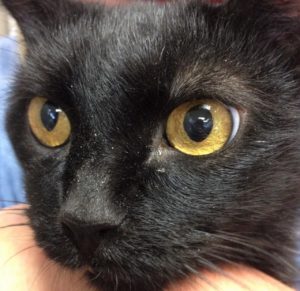 The lady who adopted Mary came to the rescue on Black Friday because one of her two senior kitties had recently crossed the Rainbow Bridge. The surviving kitty had retreated to a single room in the house, too sad to move much, and needed a new friend. Mary clearly thought that should be her! She snuggled in and quickly convinced her new mom to take her home.

Mary’s mom reports that she fits right into her new family. The other kitty in the home seems to be cheered by Mary’s presence, and has even ventured out to bump noses with her. As for Mary, she’s learning the joys of burrowing under covers, sitting on laps, and listening to Seahawks’ games with her people!

Mary Winchester’s days struggling to survive on her own are officially over. She’ll spend the holidays—and the rest of her long, happy life—with a family who loves her!