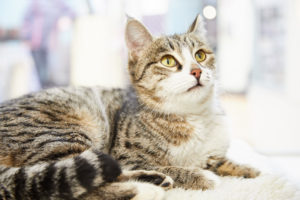 Gwendolyn is definitely a well-traveled, worldly kitty. She is a new resident to the Seattle area, coming all the way from Kabul, Afghanistan. Her story of arrival is one of love, featuring a teacher who wanted to help as many animals as she could while working in a war-torn area of the world.

Gwendolyn was first spotted by a kindergarten teacher working in Kabul. This little kitty was running across a busy street only bearing weight on three of her legs on a wet, winter day. The Good Samaritan assumed that Gwendolyn’s leg was broken, and slowly approached the car she hid under to coax her out. When she got Gwendolyn to the vet, an x-ray revealed a deformed bone that prevented her front paw from bending properly. Amputation was suggested, but since Gwendolyn didn’t let her paw slow her down, the doctor decided that she would keep it.

Immediately falling in love with Gwendolyn, the Good Samaritan took her home. It wasn’t long before Gwendolyn had charmed the three dogs and a puppy the kind teacher had also rescued, one of whom had just been hit by a car. Gwendolyn took to grooming the dogs as if they were her own kittens. 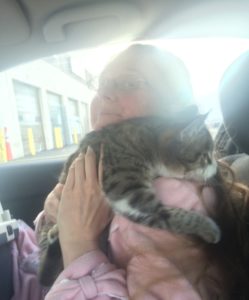 When Gwendolyn’s mom had a new teaching assignment in Alaska, she was heartbroken to discover that because of a pet limit in her new housing she would not be able to take Gwendolyn along. But re-releasing her to the streets of Kabul to fend for herself was not how she wanted to part with her beloved kitty. She knew Gwendolyn needed a SAFe, warm place where she could find her furr-ever home. She contacted Seattle Area Feline Rescue, and we were happy to help! 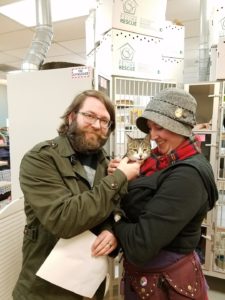 And finding a loving family the same day!

We awaited Gwendolyn’s arrival, preparing an enclosure with some yummy food and a warm bed so that she could rest after her international journey. But Gwendolyn had other ideas of what she would do when she arrived at SAFe Rescue! She decided she didn’t want to wait for her furr-ever home any longer than she already had. Gwendolyn charmed her new mom (who had been at the adoption center looking at a kitty who liked dogs) with her talkative nature and adorable personality right as she was being placed in her new enclosure.  Gwendolyn’s new family knew that she was the one, and adopted her after she had only been at SAFe for 10 minutes!

Gwendolyn, who is now known has Director Snack Sweetums (but Snack for short) is settling in to her new home wonderfully and brings her new family so much joy. Not surprisingly, her best friend is the resident dog, but Snack also has grown accustomed to her new cat siblings as well.

Snack’s story is one for the books, and it is just a reminder of how a love and passion for cats and all animals alike can bring everyone together even from across the world.