On a recent outing, a local hiker was surprised to see an animal in a rest area that wasn’t part of the wildlife: a fluffy orange cat. When she got closer, she discovered the poor kitty was friendly. She also saw a large tumor on his leg. Knowing he wouldn’t survive in the wild, the hiker scooped him up and carried him out. 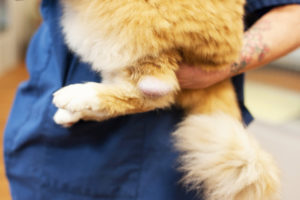 When SAFe Rescue was asked to help, we knew we had to give him a chance! Now named Farley Finnagan, this darling boy is recovering in foster care. Farley needs surgery to remove his tumor, and he may need more treatment afterwards, too.

To help heal Farley and kitties like him, please click the donate button and write “Farley Finnagan” to contribute to Seattle Area Feline Rescue’s Medical Fund.

We don’t know how Farley ended up abandoned in a rest area—but we DO know that together we can make his future much brighter than his past!

MARCH 29 UPDATE: Farley Finnagan has his surgery scheduled for this week. Paws crossed for this fluffy guy! “Meowy” big thanks to everyone who has donated to SAFe Rescue’s Medical Fund so far—you’re helping kitties like Farley get better and find homes!

APRIL 2 UPDATE: Farley came through his surgery very well, and if recovering comfortably in foster care. We ordered testing to find out if the tumor is malignant and whether he will need further treatment. We’ll let you know what we hear!

APRIL 9 UDATE: Tests showed that Farley’s tumor was not malignant. Good news! Farley was given the green light for adoption and found a home right away!