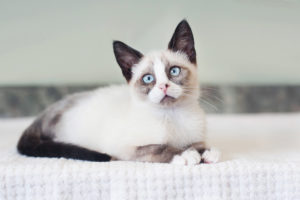 “Take a Chance on me!” We’re not sure if Chance is an ABBA fan, but we’re sure that’s the song he was singing when he arrived at SAFe Rescue. Although he is obviously adorable and lovable, little Chance has already survived more suffering than most homeless kitties endure in a lifetime. 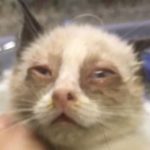 Chance started out in Eastern Washington, where he lived outside on his own. When he hurt his paw, he didn’t have access to the medical care he needed. Chance’s wound became severely infected, and (with the bones in his paw exposed) he could hardly move. Once Chance was rescued, his leg had to be amputated right away. 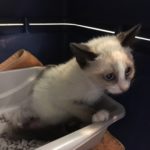 We knew about the hardships Chance had endured before he came to us, so we were expecting to meet a timid, scared kitten.  But when he arrived in Seattle, there was no shy kitty to be found—instead we opened his carrier to meet a little snuggle bug, emphasis on snuggle! 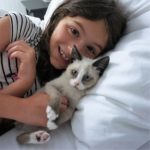 Chance went to foster care to finish healing, and his foster family soon discovered that he adores kids. He bonded with his human foster sister, and he was at her side every day for play time and nap time. With TLC, Chance recovered quickly. He learned to tackle stairs and find his way around like a normal kitten. (Although with his missing leg, he does have a kangaroo hop!) 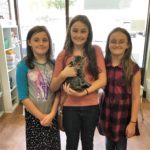 Two weeks later, Chance was ready to come back to the Adoption Center to find a family… Which he did, the very same day! Chance went home with a friendly new kitty sister, Kristi, and—to his great joy—three human sisters to love him.

Now, Chance doesn’t look back or let his past trouble him: instead, he’s looking forward to a lifetime of love! Good boy, Chance.