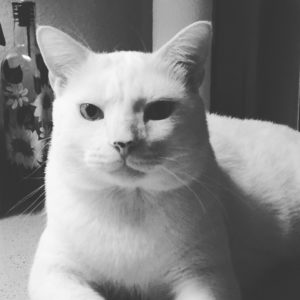 Thunder is hard to miss! At 17 pounds, he is an extra large boy, but what makes him stand out most is his adorable, oddly human-like face. He came to Seattle Area Feline Rescue from a shelter in California on September 2nd. Incredibly matted, Thunder enjoyed every grooming session we gave to him and quickly became a rescue favorite for his adorable looks and sweet nature.

Thunder had been diagnosed FIV+ at the shelter he was transferred from in California. FIV translates to Feline Immunodeficiency Virus, and it simply means that Thunder is immune compromised. FIV does not affect a kitty’s lifespan, but it is a lifelong condition. It is transmitted through harsh contact like bite wounds so it is seen more among previously unneutered male cats fighting. However, it is not easily transmitted between cats living peacefully  in the same house and it is considered very manageable. 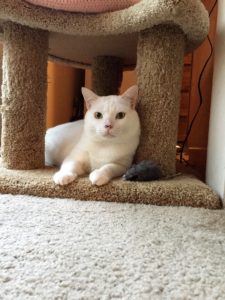 Thunder was also diagnosed with a treatable infection called ringworm shortly after coming into our care. Having ringworm in a shelter can be very risky for a homeless kitty: because ringworm is contagious, some organizations will euthanize for ringworm, even though it’s extremely treatable. Fortunately, Thunder was very “SAFe” here! We placed him in one of our dedicated ringworm foster homes, and after 3 weeks of treatment Thunder was ready for adoption.

Thunder faced one last obstacle on his journey to a home: He was continually being overlooked for kittens, until right before closing time on a Friday night.  Thunder’s perfect person had seen him before, and just couldn’t get him off her mind. She wasn’t put off by his FIV status, and came back to see him and learn more. After getting educated on it a little bit, and spending some time with Thunder, she was won over by his charm and lovable personality.

It has been 10 days since Thunder’s adoption, and we received an update that made our hearts soar. Thunder is thriving and his new family thinks he’s PURR-fect. “He is settling in and doing well. We adore him!” It is definitely a warm, fuzzy tale for Thunder!