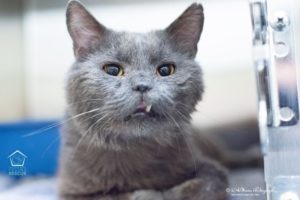 Joey is a special kitty in many ways, and his epic tale is one you won’t soon forget. Joey’s journey started in Eastern Washington, where he was living outside a shotgun factory and fending for himself.

From his loving nature, you can tell that Joey had once been loved and cared for. But hard times can affect us all. When Joey’s person passed away, he was left on his own. By the time he came to SAFe Rescue, he had a plethora of medical issues including an Upper Respiratory Infection so severe you could hear his snuffling across the rescue, and a painful, swollen mouth caused by a condition called stomatitis. It was obvious that Joey would need medical care, so we immediately started treating him.

Further diagnostics unveiled a past even sadder than we originally realized. Radiographs revealed that Joey had a fractured nose bridge and a BB gun pellet lodged in his throat. Although we could see Joey had been mistreated, he didn’t let that affect his sweet, attention-seeking nature.

The next step in Joey’s medical care was a dental procedure to help alleviate Joey’s mouth pain. He needed to have almost all of his teeth extracted. During that time, the vet also discovered that Joey was diabetic. Poor, unlucky kitty! As Joey recovered from his dental surgery, we began insulin treatment to regulate his diabetes. 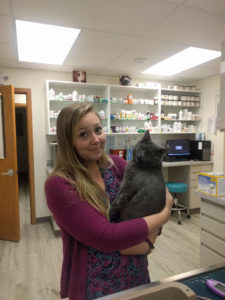 Without the continued support of our community, we might not have been able to give Joey the extensive medical care he needed. But SAFe Rescue is lucky to have such a generous, caring community of people like you surrounding us. Because of you, Joey—the kitty who fell on hard times—was “SAFe” and loved here.

Joey’s luck continued to turn! The veterinarian at Cascade Pet Hospital who had been caring for Joey during his medical treatment, was (not so slowly) falling in love with him. By the time Joey was cleared for adoption, the doctor wasted no time making him her own. Joey now has a human mom and dad, as well as two kitty sisters. We couldn’t be happier for him! Joey is, without a doubt, one of the nicest kitties you will ever meet. Now Joey has it all: looks, personality, and now a purr-fect family of his own to look out for his medical needs and give him love and pets every single day.