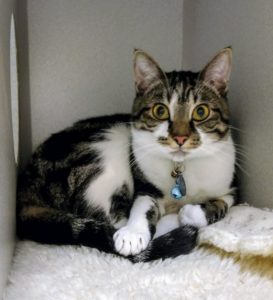 Finn is a quirky kitty with a lot of love to give, so it was very hard for him to be without a family of his own for almost 2 months. Why did a handsome, friendly young cat wait so long for a home? Finn uses his mouth to communicate what he’s feeling (meaning he will give little nips here and there), which can be difficult for some adopters.

Finn was found as tiny, abandoned kitten huddled in a discarded beer case outside in Florida. The Good Samaritan who discovered him brought him home and fell in love. He raised Finn himself, and they formed a strong bond. But because Finn was an only kitten, he developed some personality traits common to singly-raised kittens, including his mouthy nature. (He gives soft nips to tell you when he’s had enough pets and to tell you when he’s overexcited or happy.) When his rescuer’s living situation changed, and he couldn’t keep Finn any longer, he had to make a very tough decision. Hoping that Finn would find a home where he could be happy again, he asked SAFe Rescue to help.

When Finn arrived, he quickly became a rescue favorite. His never-ending playfulness was endearing to watch, and everyone thought he would find his new home in no time. But Finn was stressed in the shelter environment, and no doubt very confused as to why he all of a sudden no longer had a family. Finn began to show his stress in the only way he knew how—with his mouth!

It was clear that Finn needed a break from the busy sounds and smells of the rescue, so he was placed in foster care. His foster mom said he was a wonderful kitty, a great bedtime cuddler who would gladly play all day and then curl up next to you come night time. She could tell that Finn just wanted a person to call his.

Finn waited in foster care, until one day he was visited in his foster home by someone who wasn’t deterred by his quirky way of communicating. This adopter saw Finn for the sweet, gregarious boy that he is. Finn now has a new doggy friend, and he gets to give and receive all the love he craves in the warmth of his very own home!