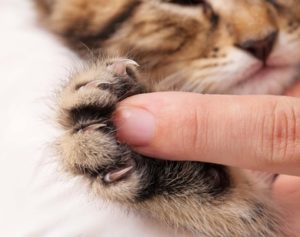 These days, more and more people are becoming aware that declawing is bad for kitties. From Denver to Nova Scotia, some areas have even made the surgery illegal. And it turns out that declawing a cat isn’t just harmful to the kitty—it also causes problems for humans, too!

Declawed cats are more likely to soil the house.

Thinking of declawing to protect your furniture? Think again! Declawing Fluffy might keep her from scratching the couch, but she’ll be more likely to pee on it instead. A recent study found that declawed cats in homes with multiple cats were three times more likely to soil the house instead of using the litterbox. This study is just one of several confirming that declawed cats are more likely to go potty outside the box. The best way to keep furniture safe is simple—provide an appealing kitty scratching post and encourage Fluffy to use it! Be sure to keep your cat’s nails trimmed, too. For more extreme protection, you can even find “nail caps” for cats. These colorful little pieces of plastic clip onto and cover claws.

Some well-meaning parents wonder if they need to declaw the family kitty to keep kids safe from scratches. That’s actually the worst step a cat owner could take: declawing increases the risk of negative human/feline interactions. Without claws to defend themselves, cats are more likely to feel insecure and resort to biting (ouch!) and a range of other behavior problems. Instead, try giving Fluffy a quiet space away from the kiddos where she can retreat if she’s feeling stressed.

In addition to the initial cost of the declawing surgery, the pain management that follows, and the risk of complication, this procedure can lead to higher veterinary costs later on, too. If a kitty who doesn’t have claws to defend herself gets outside, she’s more likely to be seriously injured by neighborhood cats or by predators. Health problems such as arthritis, stiffness, and chronic pain can also result from declawing. (Some owners find that declawed kitties are in too much long-term pain to move and play like they used to.)

There are compelling reasons NEVER to declaw a cat. Whether your goal is a safe happy family, or safe unscratched furniture, declawing is counter-productive.

Beyond these practical considerations, there’s also an important moral side to the issue. “Declawing” is a misleading name. The procedure cuts off more than claws: it amputates part of the cat’s toes. This highly painful amputation can cause suffering, health, and behavior problems for the rest of the cat’s life.

If—after knowing the facts—you still have your heart set on a declawed kitty, please choose to adopt a cat who has already been declawed. Kitties declawed by previous owners before they became homeless are waiting for you at your local shelter!

Curious to know more about declawing? Check out these FAQs from The Paw Project.

Share this:
Posted in Feline Care and tagged Well Being.